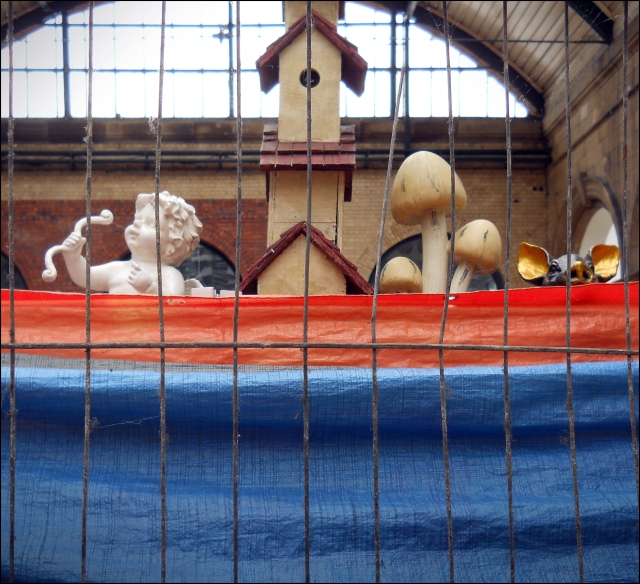 And what new madness is this!…
Come on dear reader, let us examine what we have here.
Well for a start, as I often remark to a photographer friend of mine, it’s never a good idea compositionally to have the frame divided with a horizontal feature across its middle – as I have done here. She is quite fond of having her ‘portrait oriented’, upright rectangular pictures divided by the horizon, slap bang half-way up – that sort of thing makes me uneasy, but when I mention it she says she likes it that way. For me it splits the composition into two equal halves and the viewer’s eye can’t decide which half to concentrate on, you keep bobbing between the two, and are probably put off from delving more deeply into the picture. Anyway, I have done it here with that red strip of… What is that? Plastic sheeting?
Having got the compositional issues out of the way, what else do we have?
We seem to be in a very large room with an arched roof, we have a white cherub with a bow, obviously Cupid, a strange multi-storey tiled roof birdhouse, two or three oversize mushrooms, and just peeping in, staring at us over the red thing, some beast with golden ears and an unpleasant moist-looking snout. All this behind steel mesh fencing.
I was wondering if I could tie all these things together with some sort of interesting narrative, but no, nothing has bubbled up. Perhaps I should instead come clean and explain:
We are in the Dulltown Interchange, this part is the old Victorian railway station, where the owners rent out space to a company selling flowers, plants and garden ornaments.
The picture was obviously taken on a Sunday when the business is closed, the sheeting and mesh placed there to stop passers-by, and Saturday night drunks, from pinching stuff. After a few pints of beer, who could manage to resist wobbling off home with an easy cherub under one’s arm?…